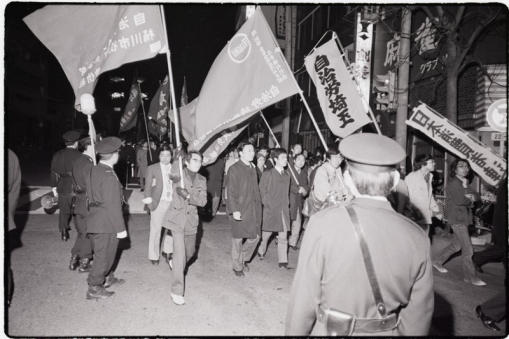 Japanese protesters march on governmental buildings in protest of the Lockheed Martin bribery scandal. In early 1976, former Prime Minister Kakuei Tanaka was accused by Lockheed's Vice Chairman of accepting 1.8 million dollars in bribes in return for Lockheed receiving large aircraft contracts. The prime minister, who had retained his seat in the Japanese legislature (Diet) after resigning as Prime Minister in 1974, would eventually be brought to trial. After a lengthy trial process Tanaka was found guilty in 1983, although his grasp on power in the Japanese government was so strong that he would not release his seat in the Diet. Tanaka would retain his seat until 1989, even after suffering from a stroke in the mid-80’s. In the late 80's Tanaka's health would begin to fail and his appeals stretched on for many years in the Japanese Supreme Court. Tanaka would eventually die in 1993 serving no jail time.

With police watching, demonstrators carrying banners march through streets in Tokyo late 3/8 toward the Diet Buildings in protest against the Lockheed payoff scandal.