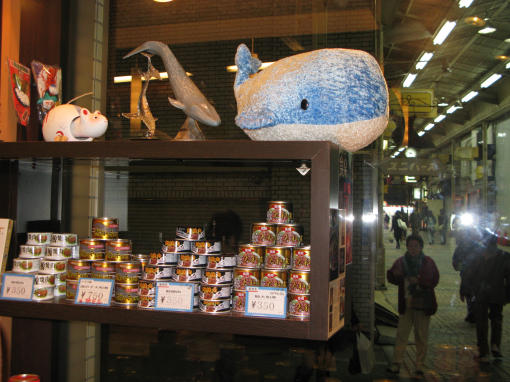 Contact with Europe and North America introduced many new foods to Japan, including whale meat.  During the early postwar, whale became an important, easily available source of protein in the Japanese diet.  In more recent years, eating whale has been outlawed in many nations, and has decreased in popularity in Japan.  However, it is still available, and is served as a popular school lunch item in Wakayama Prefecture -- the most important whaling prefecture in Japan.  Although a bit controversial, many Japanese supporters of eating whale argue that scientific evidence no longer supports the contention that the type of whales consumed are endangered -- the original reason for outlawing the killing of whale.

With the documentary film The Cove winning the 2010 Academy Award for best documentary, the issue of eating whale meat has reappeared more prominently in the international news -- along with the main topic of the film, which is about killing dolphins.  What are your students opinions regarding eating whale?  To what extent are they based on "science," and to what extent are they based on culturally engrained ideas regarding food taboos?  This picture, of a whale restaurant in Tokyo that sells canned whale meat, can be used as a starting point for this discussion.