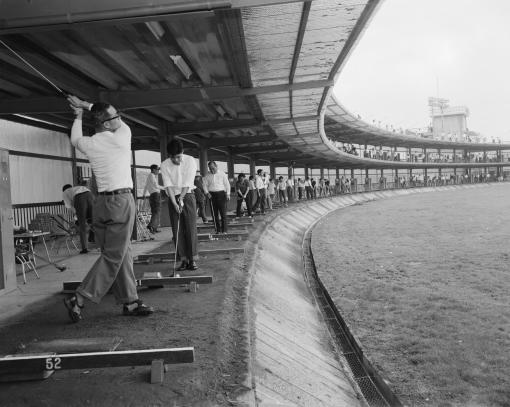 Before WWII, there were 23 golf courses in Japan; in 2004, there were over 3,000.  In addition to courses, golf ranges, as seen above, are also prevalent.  Seen as a status symbol, membership at exclusive golf country clubs reached close to $4 million during Japan's "bubble economy" of the 1980s before decreasing during the following years.  Students may want to discuss the dramatic increase in number of courses and exorbitant membership cost in relation to Japan's postwar "economic miracle."  Additionally, the constraints of Japan's mountainous geography and high environmental impact of golf courses touch on Japan's seemingly contradictory attitude toward nature.