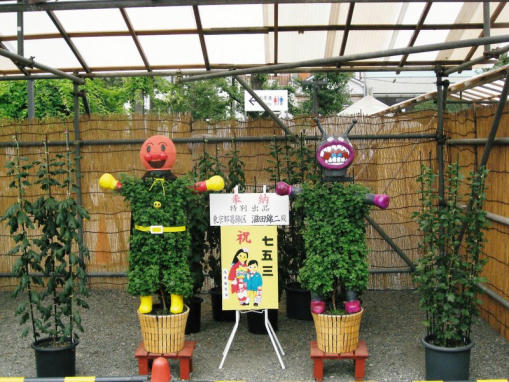 The 7-5-3 (or, in Japanese shichi-go-san) ceremony is an important Shinto ceremony to wish for the health and good growth of 7, 5, and 3 year old children.  (Although there is some regional variation, it typically is for seven and three year old girls and five and three year old boys.)  It is an important rite of passage for many Japanese families, even though most would not identify themselves as particularly "religious."  The character on the left is "anpan-man."  "An-pan" is a type of bread that has sweet bean paste inside and is a popular sweet in Japan.  The character on the right is "baikin-man," which literarally translates as bacteria man.  Baikin-man is a character int he anpan-man cartoons.  Often a theme of the cartoons is anpan-man and the other "good guys" fighting off  bacteria-man, teaching lessons such as the importance of cleanliness.  (You can see a character mask of anpan-man in a photo of a toy store.  The Chinese characters in the middle are "7-5-3" 七五三, and the picture is of a little girl and boy dressed for the special occassion.  Although the painting has the boy in a suit, many boys will also be dressed in traditional Japanese attire.  This photo was taken in Tokyo in October 2007.