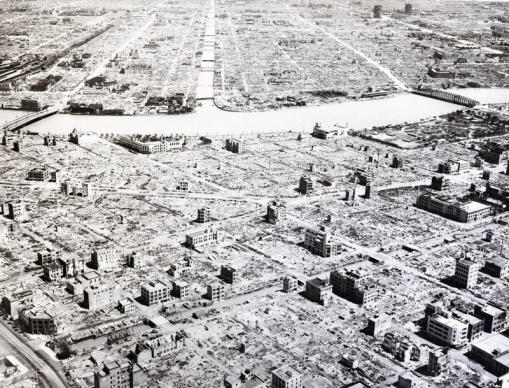 This is an aerial photo that depicts most of Tokyo after the bombings of World War Two. Only the more modern steel structures remain, while older structures were demolished under the immense allied bombing campaign. The occupation of Japan would eventually lead to a great reconstruction of Tokyo and westernization of the country. The westernization would modernize the country, causing an economic boom that was felt well into the 1990's.

9/6/1945 - Tokyo, Japan. This aerial view of the industrial section of Tokyo, along the Sumida River, gives a good indication of the extensive damage caused by our saturation bombing raids of the Japanese capital. Modern steel structures remain intact in the midst of wide areas of rubble and debris.