Bodhidharma Crossing the Yangzi River on a Reed

Bodhidharma Crossing the Yangzi River on a Reed 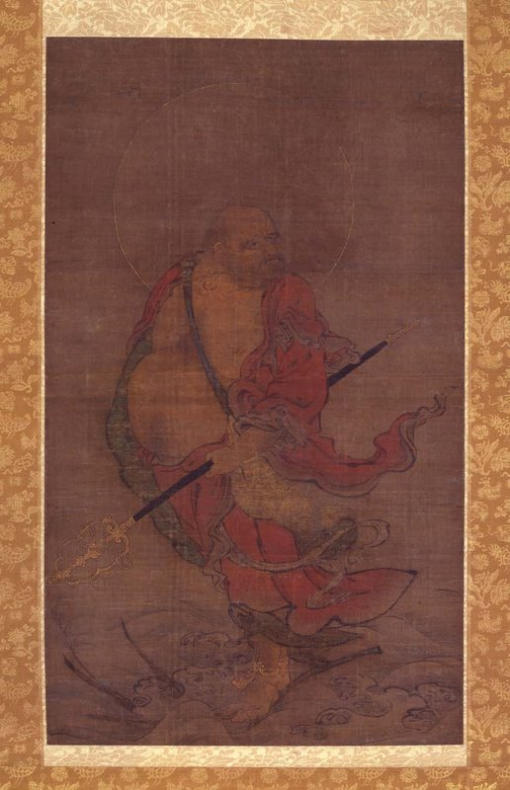 This painting depicts a central image in the legend of the life of Bodhidharma; that of his miraculous crossing of the Yangtse River on a reed.  While Bodhidharma was a historical figure, stories of his life are often embellished by legend.  One such account relates that in the 6th century, Bodhidharma, having attained Enlightenment, traveled from India to Southern China to spread his teachings.  There, he met with Emperor Liang Wu.  The Emperor was a supporter of Buddhism, but was confounded by Bodhidharma’s apparently incomprehensible line of discussion with him.1

“What is the ultimate meaning of the sacred teaching?” Master replied, “Vast emptiness; nothing sacred!” Then the Emperor asked, “Who are you who confronts me?” Bodhidharma answered, “I don’t know.” The Emperor didn’t get it.2

This is very typical of Zen, and text of this exchange between Bodhidharma and the Emperor later became the basis of a koan.  Because the Emperor failed to grasp the enigmatic meaning of Bodhidharma’s statements, the meeting was deemed unsuccessful. Bodhidharma then headed north, miraculously crossing the Yangtse River on a reed.  Upon arriving in the Sung Mountains, he spent nine continuous years meditating in a cave before establishing his first Zen Buddhist temple in China in Hunan Province.3