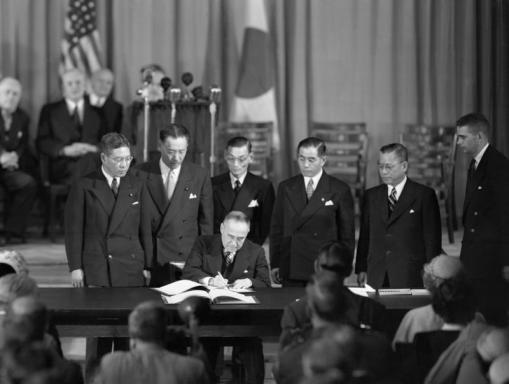 In this picture, Shigeru Yoshida, the Prime Minister of Japan at the time, signed the US-Japan Security Treaty in the San Francisco Presidio on September 8, 1951. The Security Treaty, which was signed shortly after the signing of the Japanese Peace Treaty that would be the basis for ending the Occupation of Japan, permitted American land, sea and air forces to remain in and around Japan indefinitely after the Peace treaty took effect and the Occupation ended. The Treaty also gave American forces limited police powers on Japanese soil (off of their bases), for things such as putting down riots.  Many in Japan were unhappy with the Treaty, believing it established a type of "subordinate independence" to the United States, and also made Japan a potential target for enemies of the United States.  Yoshida believed that this agreement helped allow the Occupation to end more quickly.  The Security Treaty officially ended the state of war in Japan and helped lead to the end of the Occupation in 1952.  In the time leading up to the Treaty, Japan had become an important industrial ally, supplying the US with goods from the begining of the Korean War in 1950. The US would also use Japan to gain tactical advantage, as Japan became a staging point for American military personnel into Korea. In the future, debates over renewing this treaty created tremendous political upheaval in Japan.