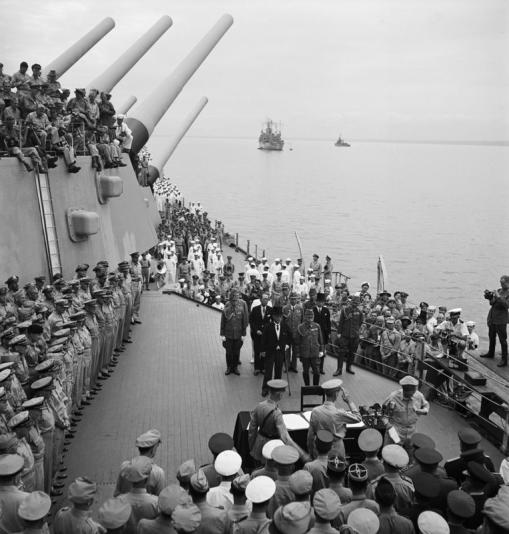 The picture shows the surrender ceremony officially ending World War II in the Pacific.  The caption below is the original caption used in 1945 to describe the picture.  Analyzing the choice of language, and possibly comparing it to the language used to describe other similar events after more recent wars, can also be utilized as part of a teaching activity.

9/4/1945 - Tokyo Bay, Japan: Lt. Gen. Jonathan Wainwright, and Gen. A.E. Percival, British defender of Singapore in 1942, both recently released from a Jap prison camp, salute as Gen. Douglas MacArthur (R, facing camera) prepares to sign the document of Japan's surrender aboard the battleship Missouri. While the allied delegations and ship crew members watch intently, the General reaches into his pocket for one of the five pens he used to sign the documents. Jap delegation is in background. ACME photo by Dave Davis, Acme war pool correspondent.