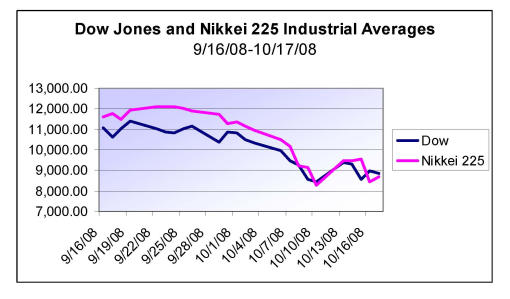 For more teaching suggestions related to this topic, please see Professor William Tsutsui's lesson "Japan in the World Since 1945".

In the New York Times article "In Finance, Japan Sees an Opening," Martin Fackler discusses possible emerging leaders in the global economy and specifically Japan's potential role.  Japan's large foreign reserves and first-hand experience with a severe economic downturn in the 1990s may give it a unique advantage in dealing with this global crisis.  This article gives students an opportunity to think critically about this theory, discuss the possible ramifications globally and more locally, and predict the pros and cons if Japan assumes this role.

Suggested study questions:
1.  Why does University of Tokyo Professor Takatoshi Ito say "Now the tables have turned, and an Asian country like Japan can have the role of white knight and capital provider"?
2.  How does Japan's economic downturn in the 1990s give it an advantage or disadvantage in this global economic crisis?
3.  What are the possible ramifications in the United States and worldwide if, as Yasuhisa Shiozaki, a former chief cabinet secretary, says, “We are seeing a new, multipolar economic regime starting to emerge"?