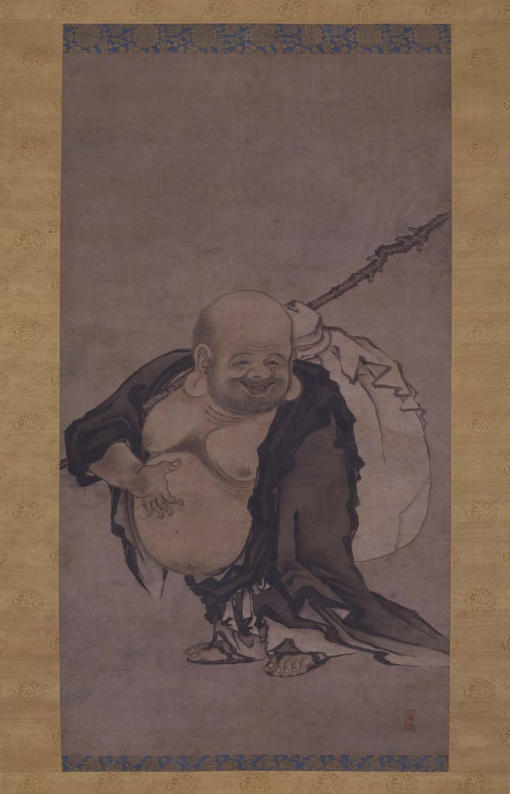 Hotei (the Chinese name for this deity, also known as "Budai" in Japan) was one of many Zen Buddhist “scattered saints”; eccentrics who likely originated as regional deities and were appropriated by Zen. Some were perhaps real individuals, while others may have been apocryphal, or composites of actual living individuals.

Hotei was a vagabond figure, constantly carrying a large staff and a sack containing miscellaneous items. His and other Zen Buddhist saint’s idiosyncratic behavior was attributed to the fact that they had attained Enlightenment and thus operated free from the conventions of logical order.1  Many interpret his particular character as a caution to exert kindness on all individuals, since even the most common man may be a reincarnation of the Buddha.

The artist who executed this painting, Masanobu Kano (~1454-1530), is a critical figure in the history of Japanese ink painting. He was the founder of the Kano School of painting, which lasted over 300 years and is considered to be one of the most influential schools of this medium.  Kano was a court painter for the Japanese Shogun rather than a monastic painter, however, he worked closely with Zen temples creating commissions for them and their supporters.  His style is reminiscent of Song Dynasty Chinese works, which were favored by Zen Buddhist patrons in Japan at that time.  Styles within the Kano school changed over generations as traditions were passed on from Masanobu Kano to his son Motonobu Kano and beyond.2