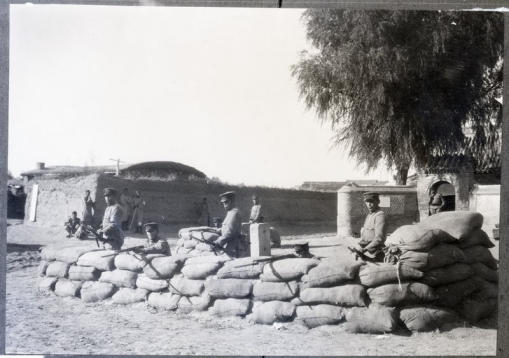 This picture was featured in American newspapers on October 31, 1931.  It depicts Japanese soldiers in Manchuria, along the South Manchurian Railway.  Currently, most historians view the movement of large numbers of Japanese soldiers into Manchuria during Fall 1931 as a major step in Japanese imperialism and movement towards war in East Asia.  The standard explanation of the photo published in 1931 is below:

"Mukden, China: Some of the Japanese soldiers at Chu Liu Ho North Manchuria, who are continuing to patrol the line of the South Manchurian Railway, presumably to keep Chinese bandits from destroying the property. The Japanese protest that the patrol is necessary because disorderly Chinese factions are receiving support from Soviet Russia."

Compare the explanation of the presence of the Japanese soldiers in the 1931 newspaper to discussions in more recent books, such as a standard history textbook.  How are they similar and different?  Why do you think this is the case?  What do these differences teach you about how to (and how not to) use newspapers as a historical source?