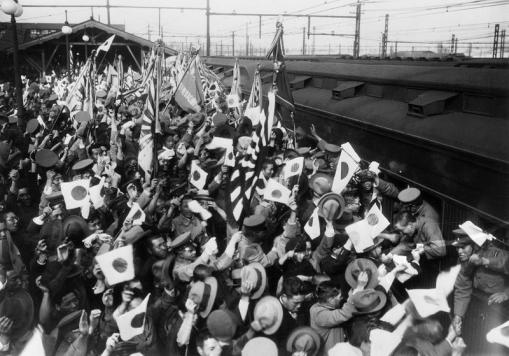 In this December 6, 1931, residents of Tokyo enthusiastically see off soldiers being sent into battle in Manchuria.  The advance of Japan into Manchuria in 1931 played a key role in the deterioration of relations between Japan and many other world powers.  What can students infer from this photo about the attitudes of Japanese citizens towards the advance of Japan into Manchuria ?

The original newspaper caption from 1931 is quoted below.  How does it compare to the manner in which a historian might describe the photo?

"Tokyo, Japan. A dramatic scene on the railway platform at Tokyo, when a train, laden with hundreds of Japanese soldiers passed through, en route to Manchuria, the scene of the present Sino-Japanese Embroglio. These are troops who took part in the battle in which the city of Tsitshihar fell before the Japanese onslaught. Note the what enthusiasm Tokyo residents welcome and bless the soldiers."