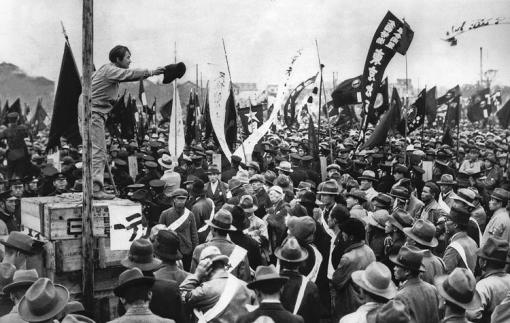 Taken on May 16, 1931, this picture illustrates a speaker in Tokyo rallying an audience in a labor protest on May Day, 1931.  The speakers is actually standing on a stage built on the spot out of beer cases.  The speech preceeded a large labor parade, in which over 1,000 Japanese were arrested.  This scene occured towards the end of the period commonly refered to as "Taisho Democracy," which was marked by an increase of citizend participation in the political process, the strengthening of the labor movement, and a rise in citizen protest.