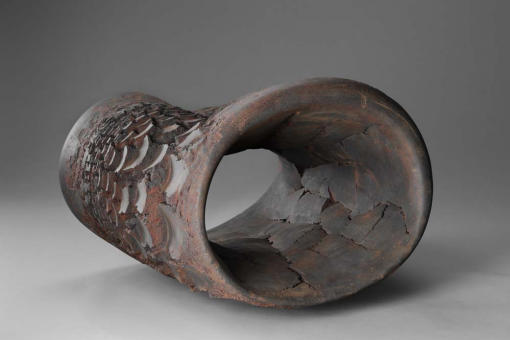 Editor's Note: This resource can be used in conjunction with the lesson Contemporary Clay: Japanese Ceramics for the New Century.

The artist Yō Akiyama often creates works that are quite large, including full-scale installation pieces. Akiyama uses the material as a vehicle to explore the dualities of interior and exterior features and the properties of creation and decay. Despite the organic appearance of Akiyama’s forms, he is meticulous in his pursuit of a preconceived image. He achieves this through a multi-step process of shaping, singeing, peeling, carving and firing each work of art. To sculpt pieces like the one shown here, Akiyama throws a form on a pottery wheel and then uses a blowtorch to induce cracks in the clay’s surface. This singeing also produces corresponding fragmentation on the reverse side of the clay.

Akiyama studied under Kazuo Yagi, one of Japan’s most influential and emulated ceramic artists. Yagi was not only masterful at creating flawless vessels in the style of Chinese prototypes, but also revolutionary in breaking free from such models and introducing the idea of ceramic form as pure sculpture . As a student of Yagi, Akiyama’s work shares these traits: impeccable technical skill and training, combined with a spirit of avant-garde experimentation.