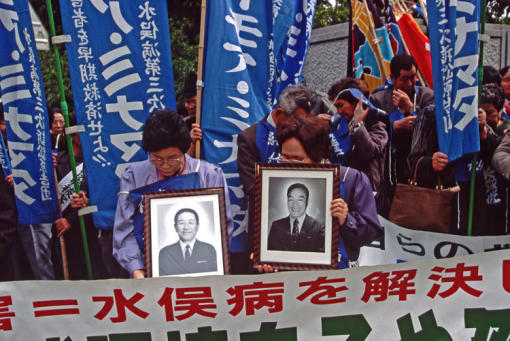 Starting in the early 1950s, many residents of Minamata-town in Kyushu developed mercury poisoning.  Not knowing the cause of the disease at first, it became known as Minamata disease.  The disease was caused by the dumping of mercury into Minamata Bay by the Chisso Corporation.  Ironically, just as the first cases were coming to light, the Chisso Corporation was being honored for its contribuions in saving the town economically throughouth the first half of the century.  The subsequent efforts to uncover the cause of the disease, and later effort to receive compensation for the damage caused by the disease became one of the most important stories in postwar Japanese history.  The story of Minamata disease can be used to explore the complex relationship between industrial development and environmental protection, the rise of citizen protest in postwar Japan, and the nature of the relationship between big business, the national government, and local government in the 1950s and 1960s.  An excellent study of the disease and its political implications is George, Timothy.  Minamata: Pollution and the Struggle for Democracy in Postwar Japan.  Harvard University Asia Center, 2002.