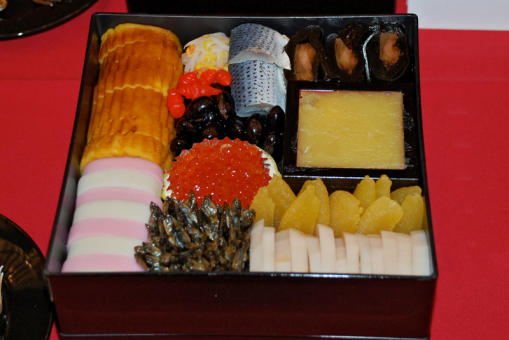 The New Year celebration is the most important and elaborate of Japan’s festivities, beginning on January 1st and lasting for several days. New Year observances in Japan are rich with symbolism of good health and prosperity which are especially evident in osechi-ryori, the traditional assortment of food served on the holiday. Osechi-ryori is characterized by its presentation in layered lacquer ware boxes called jubako and ingredients with auspicious meanings. The dishes that make up osechi-ryori are often sugared or pickled to ensure that the food remains edible and well preserved over several days without refrigeration. This allows the food to be prepared in advance and the women of the family to rest during the holiday.
Although the components of osechi-ryori vary among households and regions, the three dishes most commonly found in osechi-ryori are known as sanshu-zakana and include the following:

Kuromame (Sweetened black beans). Mame is the Japanese word for “bean” and a homonym for “health” and "diligence."

Kazunoko (Herring roe). Kazunoko, composed by the words kazu (number) and ko (child), symbolizes a wish for many children.

While osechi-ryori is still served in many Japanese households, food preparation is often extensive and traditions are changing with department stores and restaurants providing premade osechi-ryori.