During the Edo period (1603-1868), the “Star Festival” Tanabata was designated the fourth of the five seasonal festivals (gosekku). As with the other seasonal festivals, however, the history of this celebration goes back to the 6th and 7th centuries, when Japan adopted many social institutions from China, including the Chinese calendar. In China, the seventh day of the seventh month is known as Qixi (七夕) and is considered auspicious because of the doubling of odd numbers, which made it heavily yang (as opposed to even numbers, which are yin). This festival is celebrated in China as a time when young women pray to the Weaver Maiden (the star Vega) for success in the arts of weaving and sewing.

Chinese techniques for weaving silk brocade were first brought to Japan by Korean weavers, and, along with their craft, they also brought the stories and festivals associated with it. Once in Japan, however, these stories and festivals transformed as they mixed with indigenous rituals and folk beliefs. As so often happens with Japanese celebrations, new traditions tend to be added on rather than supplanting the old. The name Tanabata is a good example of this process. According to the Chinese calendar, the seventh day of the seventh month would have fallen in August, just before Obon, a time when people in Japan were busily preparing to honor their ancestral spirits and celebrate the harvest. Before the Chinese celebration was introduced to Japan, it is believed that there already was an indigenous festival called Tanabata (棚機) named after a special type of loom (hata) built on a shelf (tana) over the water. Young women would go into seclusion at this time for purification and use these special looms to weave in preparation for Obon. The imported name of the Chinese festival 七夕 (literally, “seventh night”) would normally be read Shichi-seki in Japanese, but, in this case, the name of the indigenous ritual was retained and the Chinese characters more or less tacked on. This kind of remixing of multiple layers of traditions over time explains why the “Star Festivals” of China, Korea, and Japan are all celebrated quite differently in spite of sharing a common root (1).

There are many regional variations on the legend of the Weaver Maiden (Orihimé) and the Cowherd (Hikoboshi) in Japan, but the Chinese version of the story is perhaps most generally known. According to this legend, Orihimé (the star Vega) was the daughter of the Emperor of the Heavens. Because of her remarkable diligence and talent for weaving, her father finds for her an equally diligent and hard-working husband, a cowherd named Hikoboshi (the star Altair), who lives on the other side of the River of Heaven (or Milky Way). It is love at first sight for the young couple, and they completely forget their responsibilities in their enjoyment of each other’s company. Orihimé’s loom is soon covered in dust, and Hikoboshi’s cattle wander aimlessly along the banks of the river. What is the Emperor of the Heavens to do?

With all the weight of the Confucian ethical code, which emphasizes filial piety and hard work over matters of the heart, the Emperor of the Heavens reprimands the young lovers for neglecting their duties and tells them they must return to opposite sides of the Milky Way. Heartbroken, the two beg him not to part them forever. Finally, he relents and allows them to meet once a year on the seventh day of the seventh month, but only if they work hard the rest of the year. When the seventh day of the seventh month finally arrives, Orihimé hurries down to the riverbank to cross over to her lover, but, in the night, the rain has turned the river into an impassable torrent. What is Orihimé to do? Suddenly, she hears the sound of flapping wings and sees a flock of magpies. Before her very eyes, they create a bridge of interlocking wings for her to cross over to Hikoboshi, who is anxiously awaiting her on the other side. 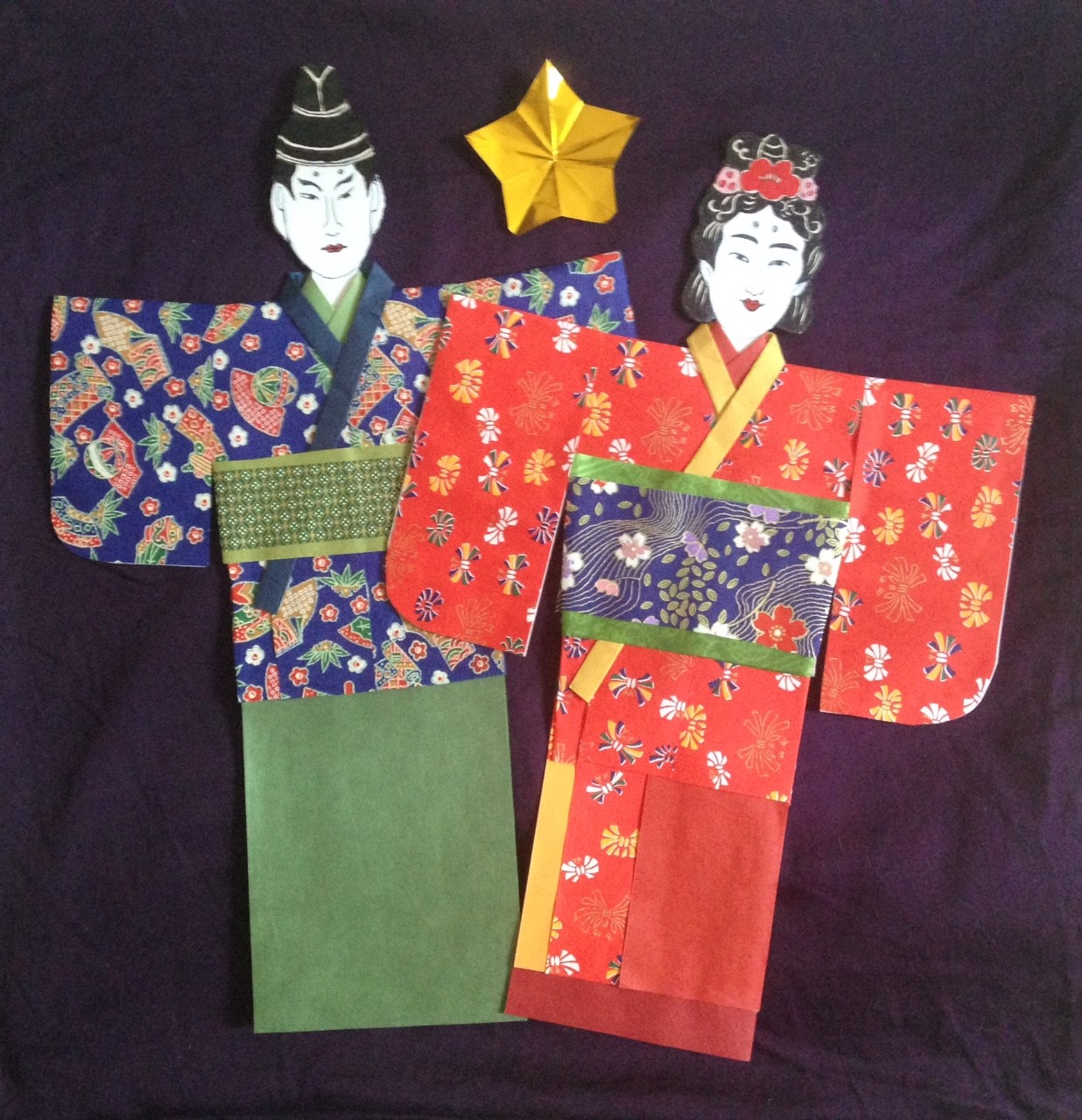 The love between Orihimé and Hikoboshi has inspired some to refer to this festival as “Asian Valentine’s Day,” and like lovers throughout history, Orihimé and Hikoboshi have had to face their share of obstacles! Tradition has it that they may only meet on the night of July 7th if it is not raining. This was not such a hurdle when Japan followed the Chinese lunar calendar and the 7th day of the 7th month fell in August, but, when Japan switched to the Gregorian calendar during the Meiji period (1868-1912), the date for Tanabata shifted to the middle of the rainy season. This greatly reduced the chances of the star-crossed lovers actually getting to meet, and it may be why, in many parts of Japan, this festival continues to be celebrated in early to mid-August. Another reason many places in Japan continue to celebrate Tanabata according to the Chinese calendar is that it marks the beginning of preparations for the important festival of Obon.

During the Edo period (1603-1868), each of the five sekku became associated with different plants or flowers (2),  and Tanabata became known as Sasa no sekku (the Bamboo festival). Because Tanabata is a festival for celebrating the arts, especially of weaving, sewing, and writing, school children in the Edo period would wake up early on the day of the celebration to collect dew from sweet-potato leaves. They would use the dew to mix their ink and then practice writing wishes on mulberry leaves. Later, instead of writing on leaves, the custom shifted to thin, long strips of paper called tanzaku. For Tanabata, these are generally referred to as goshiki no tanzaku, or the five-colored tanzaku, because they come in the five auspicious colors that correspond to the five elements: blue/green (wood), red (fire), yellow (earth), white (metal), and black (water). They would hang these wishes on bamboo branches and take the branches to a nearby river to have them wash away with the current in the belief that this would ensure that their wishes would come true.

Decorating bamboo branches with colorful paper decorations and wishes continues to be a central focus of the celebration today. Schools in Japan come up with spectacular Tanabata decorations, and decorated bamboo trees can be seen in almost every schoolyard or entryway in this season. In our capitalistic societies of today, children often associate wishes with asking for material or commercial goods but, for this occasion, students should be encouraged to think beyond asking for material things because the spirit of the festival is about improving in some area of their studies or the arts. This provides opportunities for students to think about the area of the arts—literacy, dance, music, and the visual arts—where they would most like to improve.

Although these wishes on bamboo trees or branches were traditionally dropped into nearby streams to be washed away, today environmental concerns prevent people from clogging up the waterways with their Tanabata decorations. Instead, the tree and decorations are ritually burned. In spite of all these adaptations, the spirit of Tanabata with its emphasis on the arts still remains strong in Japan today.

Above, the stars are shining like gold and silver sand

I have written the five-colored tanzaku

The stars are shining as they look down from the sky

(1)  In China, Qixi continues to be a festival for young women to pray to the gods to improve their skills in sewing and weaving. It is also an important festival for couples to pray for happiness in marriage. In Korea, this festival is known as Chilseok. According to the lunar calendar, Chilseok signals the beginning of the monsoon season, and the rains are thought to be the tears of the lovers, Jiknyeo (the weaver maid) and Gyeonwu (the ox herd). On Chilseok, Koreans traditionally take baths for good health and eat wheat flour noodles and other wheat-based foods because wheat is believed to taste best before the monsoon season.