Datsun Automobile in the 1930s

Datsun Automobile in the 1930s 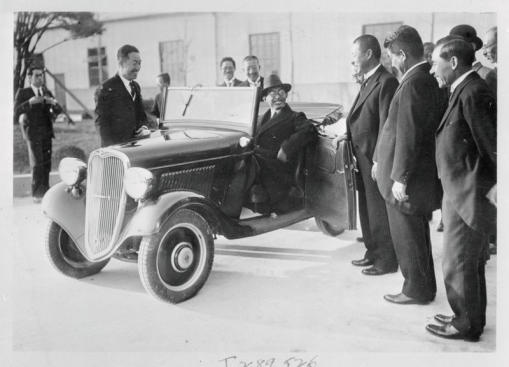 Prince Chichibe, brother to Emperor HIrohito, is shown sitting in a Datsun in 1934. Datsun was one of Japan's most successful mass produced cars. Datsun was a car line of the Nissan Company, that had acquire DAT Motor Company in the early 1930’s and retained part of the original name. Datsun showed that Japan could manufacture high scale machines quickly. This would directly correlate to Japanese strength in mass production during World War II. The Nissan Company would be an important part of the Japanese war machine producing military trucks.

The caption that appeared when this photograph appeared in newspapers in 1934 read as follows: "This is Japan's challenge to occidental manufacturers - a tiny automobile to sell for less than the lower-priced American cars, which was said to be in trial order stage for India, Czechoslovakia, Straits settlements, and Great Britain with plans for an assembly plant in Australia. The car was the Datsun; Prince Chichbe, the eldest brother of the Mikado, is shown in the car at the Japanese Industrial Association Plant in Yokohama." December 30, 1934.