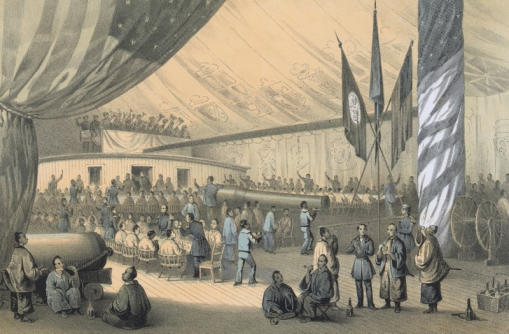 Commodore Matthew Perry, US Naval Officer, led an expedition to Japan designed to force Japan to open formal trade and diplomatic relations with the United States, during the years 1853-54.  Perry's was successful in his mission, which resulted in signing the of the Treaty of Kanagawa in 1854.  This treaty gave the United State the ability to allow ships to stop over in the ports of Hakodate (in Hokkaido) and Shimoda (on Honshu, relatively close to Tokyo), and to base a consul in Shimoda.  Shortly after, the US received the right to trade with Japan.  These same priviliges were extended to France, Britain, the Netherlands, and Russia.  This painting depicts Perry hosting a dinner party aboard the USS Powhatan for Japanese officials.