Woodcut of the Seige of Port Arthur

Woodcut of the Seige of Port Arthur 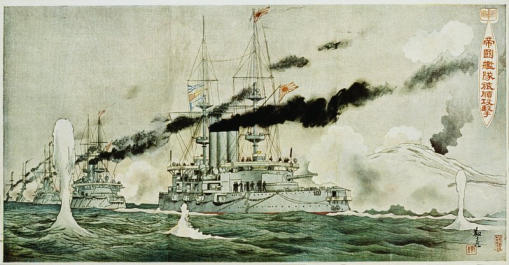 This depiction shows Japanese war ships attacking a Russian held position at Port Arthur. The Siege was the longest and hardest fought battle of the Russo-Japanese War. The port was leased to the Russians by the Chinese, but the area was taken and held by the Japanese during the first Sino-Japanese War. The Russians saw the port's great importance as is was the only non-frozen Russian port and was closely tied to Russian expansion into the rest of Asia. The battle introduced new, more deadly, military weapons such as hand grenades, barbed wire, maxim machine guns and howitzers.  The Treaty of Portsmouth ended the war, essentially as a Japanese victory.  The victory solidified Japan's new prominence as an international power.

Woodcut depticting the bombardment of Port Arthur by the Japanese Navy ca. 1904-1912.