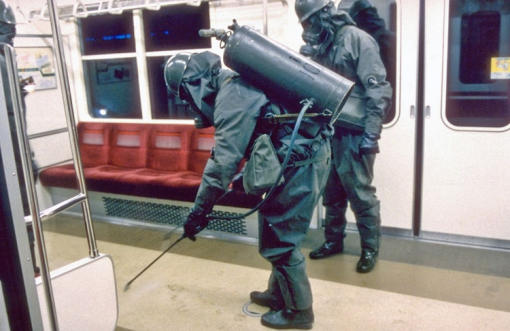 In one of the scariest examples of domestic terrorism in late 20th century Japan, the Aum Shinrikyo cult released Sarin Gas into several lines of the packed Tokyo subway system at the height of the Monday morning commute on March 20, 1995.  The attack, which utilized the deadly nerve gas sarin, resulted in 12 deaths and over 50,000 hospitalizations and created widespreach panic in Japan.  The attack was extremely significant in illustrating the vulnerability of Japan (and many industrialized nations with mass transit systems) to effective terrorist attacks orchestrated by relatively small groups.  The attack has been widely addressed in scholarship and literature, including in Murakami Haruki's famous work, Underground.  (Murakami, Haruki.  Underground': The Tokyo Gas Attack and the Japanese Psyche, Vintage, 2003.)  This picture illustrates the clean up of the subway cars after the attack.  The issue of bioterrorism remains on the forefront of security concerns in Japan.