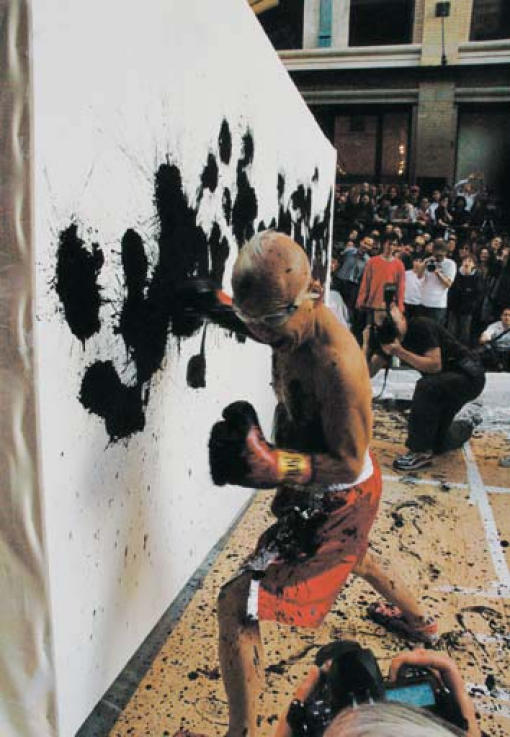 Editor's Note : This photograph can be used in conjunction with the lesson plan Making a Home: Japanese Contemporary Artists in New York.

Ushio Shinohara is an important figure in the international development of contemporary art. His paintings, performances and sculptures reflect an interest in communicating intensity, action and chaos. In 1960, he was a co-founder of the Neo Dada movement, which emphasized improvised artistic performance and production, as well as found object assemblages and other avant-garde forms of expression.1  In the late 1950s, he created the technique of “Boxing Painting,” a performative process of painting which involves the artist donning boxing gloves, dipping them paint or ink, and “boxing” paper or canvas. For the piece included in the Making a Home exhibition at Japan Society Gallery, Shinohara used sumi ink (a type of ink primarily associated with traditional Chinese and Japanese calligraphy and scroll painting) on paper, and then applied the paper to a traditional folding screen.

Shinohara has lived and worked in New York City since 1969. Many of the artist’s current works reflect a heightening of the everyday realities of metropolitan life. This includes interpretations of both the outlandish as well as the mundane.

[NOTE: As of 4/2008, several videos of Ushio Shinohara executing boxing paintings were available on YouTube.]

Shinohara was born in Tokyo, Japan in 1932; He moved to New York 1969 and currently lives and works in Brooklyn.