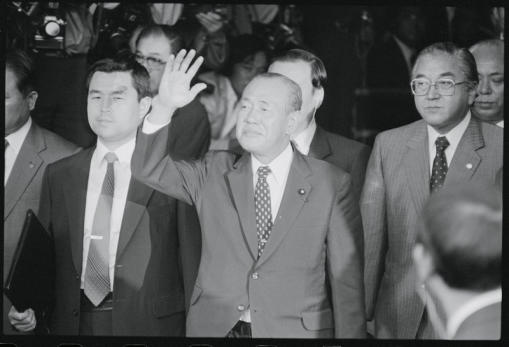 Former Prime Minister Kakuei Tanaka raising his hand to reporters  as he left Tokyo District Court after being found guilty of taking two million dollars in bribes from Lockheed Corp., and was sentenced to four years imprisonment in 1983 in Tokyo, Japan.  The scandal stemmed out of testimony in front of the United States Senate on February 4, 1976 that the former Prime Minister and others took bribes and kickbacks to direct millions of dollars of contracts to the Lockheed Corporation while he was prime minister in 1972.  (He already had been forced out of office due to other scandals, before the Lockheed scandal became public, in 1974.)  Although convicted in 1983, he passed away before going to jail.