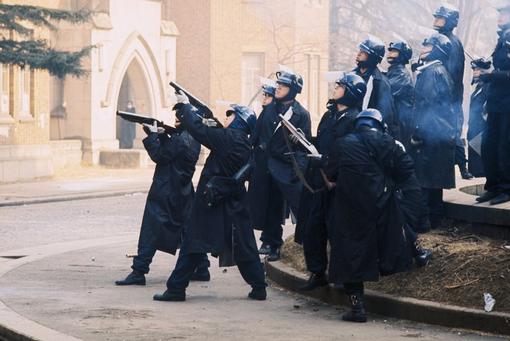 Police are attempting to dislodge student protesters held up inside Tokyo University January 18, 1969. For many months students had been protesting Japan's tolerance of perceived US interference in Japan, including American bases in Japan, US involvement in the Vietnam War and the US occupation of Okinawa. After World War two the Japanese government had given little resistance to the will of the US. This university protest was linked to a world movement of protest that had been happening in response to anti-war and anti-government sentiments. The students represented a growing leftist sentiment against the US and the conservative Japanese government.

Police fire tear gas grenades at roofttops of Tokyo University, January 18th, during an 11-hour battle that dislodged the radical students who have paralyzed the campus for almost a year. January 18, 1969. Tokyo, Japan.