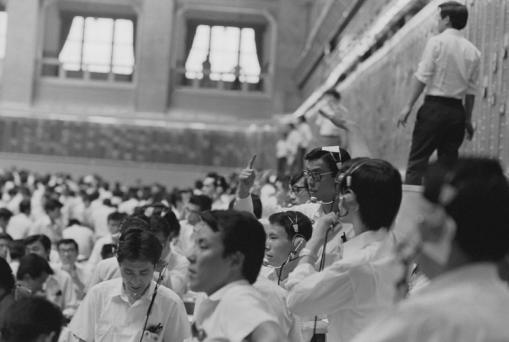 On August 15, 1971, President Richard Nixon announced a new economic policy which included freezing the United States and foreign currencies exchange and imposing a ten percent tax on foreign goods.  Called the "Nixon shock" in Japan, this announcement was greeted with surprise and panic in Tokyo and resulted in ten times more transactions in the Tokyo foreign exchange market that day than the average.  While Europe temporarily halted foreign currency transactions, Japan was the only major American trading partner to allow them to continue for 10 trading days.  During that time, the Japanese government purchased more than 3.7 billion dollars.  On August 27, the Japanese Finance Minister announced the end of the fixed 360 yen to one dollar rate, which had been in place for the previous 22 years.

Original photo caption: Confusion: Tokyo. Stock clerks gesture with their hands during trading on the Tokyo Stock Market early August 16 following President Nixon's speech on the U.S. economy. There was massive confusion, but well over 300 million dollars were sold during the morning session. The Bank of Japan intervened to prevent the dollar from dropping below the government-set exchange rate with the Japanese yen. August 16, 1971. Tokyo, Japan.  Photographer unknown.

About Japan teaching idea on the interconnectedness of Asian markets.

Succinct summary of the major policy events in the United States in 1971 in the Ministry of Foreign Affairs of Japan's 1971 Blue Book (in English).