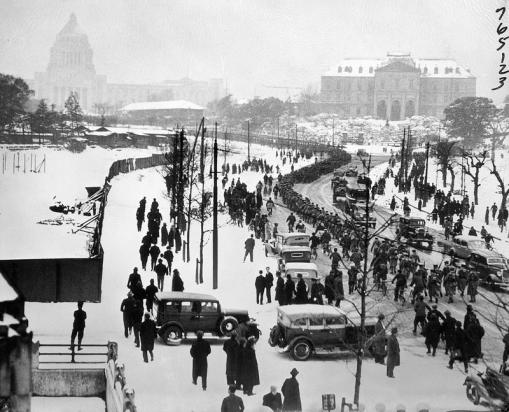 On February 26, 1936, a portion of the Japanese Army took over Tokyo in anger over what they viewed as an overly passive foreign policy and lack of respect for the Emperor on the part of the government.  This picture shows troops during a few hour hiatus in the coup. It shows the third regiment - part of the insurgent group - marching out of police headquarters to return to their barracks. They are pictured passing the staff military college and the new Diet building looms in the background. It is recorded that when they arrived at their quarters they found them occupied by loyal troops so they marched back and took the headquarters building of the Tokyo Metropolitan Police Department, which they hled for several more days.   An excellent book about the incident is Ben Ami Shillony's Revolt in Japan: Young Officers and the February 26, 1936 Incident (Princeton University Press, 1973).  This picture was taken on Februrary 26, 1936.