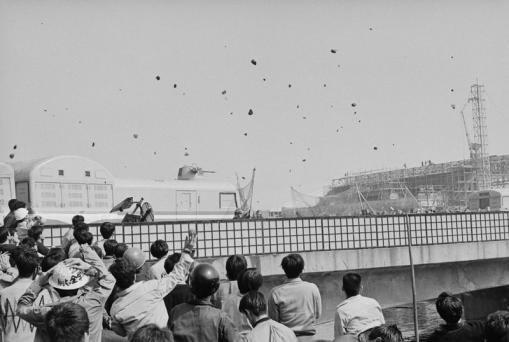 Brick Throwers. Tokyo, Japan. Leftist Zengakuren students hurl bricks over a wall at Tokyo International Airport in an attempt to stop conservative Premier Eisaku Sato from departing on a five nation Asian tour which includes South Vietnam. They were unsuccesful, but after the premier's party took off, the students continued to clash with police, setting fire to riot cars. One student was kille dwhen he was squeezed between riot cars. October 10, 1967.

Protestors are seen throwing bricks in the direction of Tokyo International Airport, October 10, 1967. The Premier was departing for a diplomatic tour of Burma, Malaysia, Singapore, Thailand, Laos, Indonesia, Australia, New Zealand, the Philippines, and South Vietnam. Students and Leftists were highly against the idea of Japan being involved in the Vietnam War, which was taking place at the time. The left resented the conservative leadership in Japan during the late 1960's and protested over the strong Japanese connection to the US. Protests were common, and centered around issues of the Vietnam War and the US occupation of Okinawa.