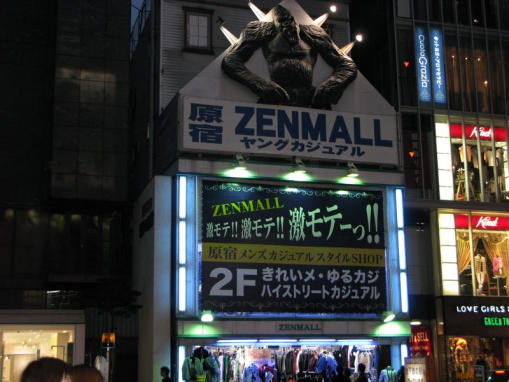 This photograph of the "Zenmall" in the fashionable Harajuku secton of Tokyo raises many questions about the use of "tradition" in modern Japan, and the movement of culture across oceans and continents.    The full title of the mall reads: "Harajuku Zenmall Young Casual,"  with bright spotlights shining down on a gorilla.  Obviously, none of this has anything to do with zen, other than the usefulness of zen as a marketing tool in Japan.  It does raise questions however, such as why the building would be called a "zenmall" and what the appeal of this term would be to fashionable, teeanage audiences.  It also plays on the theme of contemporary Japan re-constituting traditions into contemporary images for many different purposes.

The photogaph was taken in March 2008.