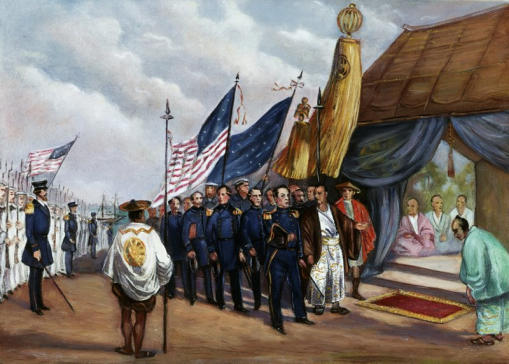 The painting is a depiction of Commodore Matthew Perry's meeting with Japanese officials at Yokohama in 1953. Several countries had tried previously, yet unsuccessfully, to open up the country to trade. The Commodore's persistence and threat of force made it extremely difficult for Japan to continue to refuse to open up for trade and diplomacy with the United States.  Perry returned in 1854.  During his absence, with considerable political difficulty, the Japanese government decided to give in to Perry's demands and open trade and diplomacy with the United States, even setting up a US consul in the relatively remote port of Shimoda.  Predictably, European powers quickly followed suit in making similar demands, to which Japan also acquiesced.

Michael Auslin of the American Enterprise Institute analyzes the complex relationship between Japan and the United States in greater detail in The ABCs of the U.S.-Japan Relationship: Alliance, Business, and Culture.