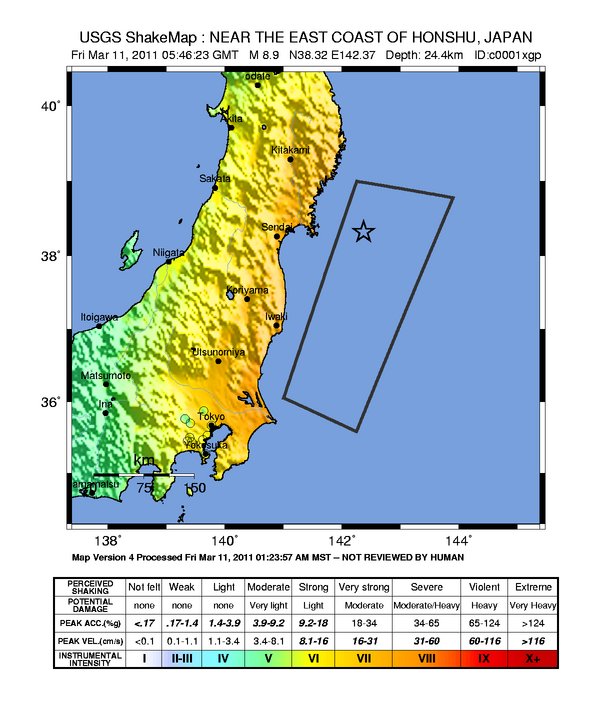 We are in the process of creating a number of resources for teaching about Japan's recent natural disasters and ensuing problems with the Dai-ichi Nuclear Plant  in Fukushima.  A number of websites are available that can support educators interested in teaching about the March 11, 2011 earthquake and tsunami in Japan.  A partial list with suggestions for use is provided here.  Please add your ideas using the comment feature below.

BBC News - BBC News online also has extensive interactive media, including an animated guide to how tsunamis work, how to measure earthquakes explained, a timeline of major earthquakes in Japan, and photos of Migagi Prefecture both before and after the disaster.

US Navy News Service – The US Navy News Service website provides information about the United States navy, including photos taken in Japan documenting the effects of the earthquake and tsunami.  The website states, “All information on this site is considered public information and may be distributed or copied unless otherwise specified. Use of appropriate byline/photo/image credits is requested” (http://www.navy.mil/privacy.asp).  This also can be used as a way to model appropriate usage of images found online.

Ways to Show Support
Kids for Japan Connected by Japan Society Education Programs - This Facebook page is designed for children and teens to share their thoughts and encouragement through words and art with children in Japan affected by the Tohoku earthquake of March 11, 2011 and its aftermath. Japan Society Education Programs will make sure that the students and schools of the region can see this site. Educators can also use this site with their classes. Parents can photograph and upload their children's messages and artwork here.

Twitter – Popular in Japan as well as the United States, Twitter is a medium to publicly broadcast 140 character messages, available for all to see.  Students can be encouraged to to tweet to show support for the people of Japan.

Flickr – Flickr allows users to post photos online.  Privacy can be restricted or photos can be available for all to see.  Perhaps students would be interested in creating a grassroots “Art to Heart Japan” campaign by posting digitized artwork made to support and encourage the children affected by the earthquake and tsunami.

Vimeo and YouTube – Video sharing sites are another forum for sharing well-wishes.  Animoto allows users to create 30 second videos using photos, videos and music for free, which then can be uploaded to various sites.

Raising money to aid the relief effort for this and other natural disasters is another concrete way of showing support.  Having students perform due diligence, including online research, in choosing which organization(s) to support can be a key aspect of this project.  (Japan Society has created a disaster relief fund to aid victims of the Tohoku earthquake in Japan. 100% of your generous tax-deductible contributions will go to organization(s) that directly help victims recover from the devastating effects of the earthquake and tsunamis that struck Japan on March 11, 2011.)

Further teaching ideas and links to resources
Natural Disasters, a list of resources on About Japan related to previous natural disasters in Japan